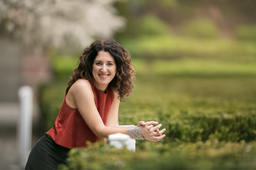 In soccer, a striker is the player charged with scoring the lion’s share of the team’s goals. While not a soccer player herself, Salwa Emerson ’92 has developed a character who is — and with the name Chance Striker, we know what position he plays!

Chance will make his debut in just a few months with the release of Chance Striker: One in a Million, a book for reluctant readers ages 9-13 that was inspired by Salwa’s son. With its upcoming publication, we spoke with Salwa to learn more about the author, Chance, and her abiding connection to Dwight.

Deep Dwight Roots
Salwa’s family connections to Dwight date back to the 1930s, when her great uncle, Sid Greenspan, played basketball at City College with the All-American team captain, Moe Spahn, Chancellor Stephen Spahn’s father. More than 50 years later, Salwa and her mother, Mary Abdullah, came to Dwight simultaneously; Salwa was a freshman, Mary a part-time German teacher. Together, they deepened their roots in our community. Today, Dr. Abdullah can still be found on campus, where she is one of our longest-serving faculty members.

Salwa, as it turns out, also taught at Dwight. After stepping back into the classroom as an adult — and even to this day — she confides, “Whenever I see Chancellor Spahn, who has been so wonderful and like a godfather to me over the years, I still feel like I did when I first met him as a 13-year-old!”

That was in 1988, when Salwa, a born performer who had acted in children’s showcases, transferred to Dwight from the Professional’s Children’s School. Her family lived at 71st Street and First Avenue, so Salwa didn’t have far to travel; Dwight was located at 400 East 67th Street. The school offered the combination of quality academics and a supportive community that served her well.

Salwa, whose name means “consolation,” was a leading light at Dwight talent shows, playing the piano and singing her own songs. She also wrote for the school newspaper, and reports that being recognized by teachers and classmates for her musical and writing abilities was invaluable. Back in the day, Salwa’s style also proved to be another form of stand-out self-expression. She recounts, “I was the girl who wore vintage shop clothes, Doc Martens, and orange lipstick!”

A Love of Literature
Salwa was also the girl who walked down the street reading a book. English was her favorite subject and Joanna Delson, Assistant Chair of English, her favorite teacher. “She appreciated my literary interests, which ranged from the esoteric like The Effect of Gamma Rays on Man-in-the-Moon Marigolds to classics like Jane Eyre,” Salwa explains.

“Ms. Delson and all of my English teachers were so supportive, as was Chancellor Spahn, who also fed my love of literature,” she continues. “He gave me books such as The Alchemist and a collection of Rumi poetry.” Both the Chancellor and Dwight also gave Salwa the confidence needed to tackle any and all of life’s challenges.

Equipped with writing chops and a strong belief in herself, Salwa set her sights on just one college: Barnard. Thanks to Barnard’s co-registration initiative with the Manhattan School of Music, she enrolled in a jazz vocal program and continued to flex her performance muscles. At Barnard, she formed her own jazz trio and was part of an a cappella group, while earning a BA in English Language and Literature.

With her multitude of talents, Salwa could have pursued a career as a songstress, in musical theater, or in the world of letters. The latter fit the bill and her first job was as an assistant at St. Martin’s Press, but shortly thereafter, Salwa was derailed literally and figuratively by an illness that left her in a wheelchair. After a full recovery, she pivoted and joined her mother again at Dwight as a substitute English teacher and SAT tutor. “It was a great experience,” she says. “Some of my own teachers were still there, I loved working with teens, and coming back to Dwight felt like coming home.”

On the Move and Taking Chances
Graduate school ultimately beckoned and Salwa earned a Master’s in English at NYU. As her own family grew, she homeschooled her children for three years. “I learned alongside my kids and we had the ability to be so creative by using New York City as our classroom … the world was our oyster! I found experts in different areas, such as musicians who taught Medieval studies, and designed a homeschooling curriculum still in use today,” she reports.

Salwa’s oldest son later followed in his mother’s footsteps, attending Dwight for two years before the family relocated temporarily to Williamstown, MA. Salwa became an Adjunct Writer at Williams College, helping students apply for Fulbright fellowships. After moving back, Salwa taught again at Dwight and then at the French-American School of New York.

Over the years, while criss-crossing states and schools, Salwa continued to write — poetry for herself and marketing content for clients through her company, Emerson Ink. In early 2018, after discovering that there were no books about soccer for reluctant readers, she took on a new literary challenge to fill that gap. As the mother of an ardent soccer fan and player, she recounts, “Before I knew it, I began writing a story and this character emerged full-blown on my computer screen! His name, Chance Striker, is the perfect moniker for a bit of a wily, charming underdog.” Born with two left feet, he overcomes his disability — and the odds — to become a star on the pitch.

Less than one year after Chance came to life, with the help of an illustrator, co-writer, and funds raised through a kickstarter campaign, Salwa is self-publishing Chance Striker: One in a Million.

The Sky’s the Limit
“Working with collaborators who share the same vision is amazing and now, thanks to the support of others, I can envision an entire Chance Striker series,” Salwa enthuses.

She credits her alma mater for this optimism: “I feel like Dwight taught me that the sky’s the limit — that anything is possible. Over the years, I have seen so many of Chancellor Spahn’s ideas come to fruition, thanks to his inspiring visionary leadership and belief in those on his team. He has been a great role model for me.” She continues, “After attending the Chancellor’s 50th anniversary celebration last spring, I was struck by how many other students and alumni feel the exact same way. They all share the belief that anything is truly possible, thanks to the confidence he instilled in them.”

With another Chance Striker adventure in the works, it looks like anything is possible for him as well!