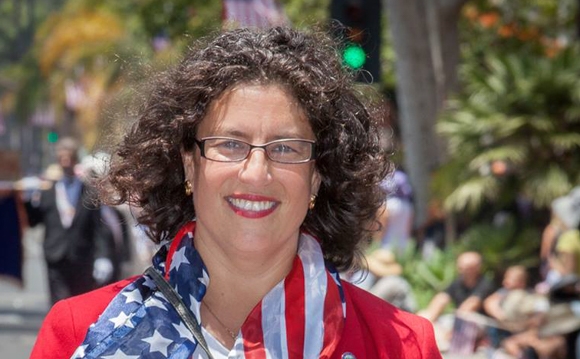 The Value of an IB Education Lasts a Lifetime:
Profile of Helene Schneider, Anglo ’88, Mayor of Santa Barbara, CA

The 1988 senior girl named most likely to succeed has certainly lived up to her classmates’ expectations. Currently in her second term as Mayor of Santa Barbara, Helene Schneider is setting her sights on a seat in Congress with one goal in mind: “to get things done in Washington.”

Helene has been “getting things done” since her high school days at Anglo-American, where she served on the Student Council and was named Head Girl, the senior girl class leader. It’s not hard to see why Helene was voted to represent her class because she was also the girl named most sociable, athletic, and with the best personality.

“Being Head Girl was a big deal at the time,” Helene recalls. “And it seems that was my first election! Also that year, I had my first lobbying experience when Principal Irene McCreery enlisted the Head Boy and Head Girl in a serious clean-up effort of our senior lounge. It was quite messy and we had to encourage our classmates to ‘toe the line’ to keep it neat, so that we could keep it open.” This was apparently a sizable undertaking and lampooned in the 1988 yearbook with a student-drawn cartoon.

"Looking back, the IB prepared me for success in a number of ways. The Theory of Knowledge class helped me a great deal to become a critical thinker. The IB curriculum enables you to make connections across disciplines that you would normally think of as distinct. Today, what motivates me the most as Mayor is connecting those dots in a positive way that others don’t see, and I can trace this back to my IB education at Anglo.”

Helene’s days at Anglo were chock-full of activities beyond Student Council, including theater and sports ― and memorable experiences that she carries with her to this day. “I still remember my drama teacher Peter Carvell ― and quote to others what he said about public speaking: ‘If you’re up on stage and can’t remember your line, remember that the audience doesn’t have the screenplay in their hands. It’s up to you to figure out how to move forward with confidence. What you say next will be seen as part of the play!’ This advice has helped me tremendously over the years when participating on panels and in forums … in all manner of public speaking.”

Helene cites the influence of another Anglo teacher, English Department Head James McHugh. “He was an amazing teacher! Whenever we studied Shakespeare, he played a record of the play as we were reading, so that we could listen to the tone and better understand the context. I continued to do the same in college with audiotapes.”

After delivering the Valedictory speech at Anglo’s commencement, Helene headed to Skidmore to major in English literature and minor in Women’s Studies. On campus, she began advocating for women’s rights and interned at Planned Parenthood, but credits the initial blossoming of her interest to an experience she had during her IB English oral exam. “My examiner was from England and she posed a question that stumped me: ‘What do you think about the fact that in the last two years of high school, the only female author you read was Emily Dickinson?’ Well that certainly opened my eyes!”

During her senior year at Skidmore, a more formal Planned Parenthood internship shaped up and Helene served as President of Network, the student-led women’s rights club, organizing 125 students to attend a march and rally in Washington, DC. After graduation, she moved cross-country to Santa Barbara where she volunteered for the local Planned Parenthood affiliate and later became the Personnel and Volunteer Coordinator. As the organization grew, Helene moved into Human Resources and earned a professional certificate in HR Management before becoming director of the department for the Santa Barbara, Ventura, and San Luis Obispo Counties affiliate. “This was the perfect blending of my career with my passion for the cause,” she says.

It didn’t take long for Helene to enter the broader Santa Barbara arena of politics, volunteering on the board and later serving as President of a local volunteer advocacy organization, the - Santa Barbara Women’s Political Committee, advocating for a wider range of women’s issues, all while keeping her post at Planned Parenthood.

"Anglo has had such a lasting impact on me ."

In 2001, Helene’s career in public service was cemented with her appointment as Commissioner with the Housing Authority of the City of Santa Barbara. She tackled local-area affordable housing issues, which she explains too often fall under the radar: “People think of Santa Barbara as a wealthy community and tourist destination. The reality is that we have many residents here earning low wages and issues of poverty and housing to address.” And so she did address them and advocated for the passing of a large living wage ordinance.

Two years later, when a City Council seat opened up, Helene decided to throw her hat in the ring. She kept her eye on pushing for the ordinance adoption, which eventually transpired to benefit the community in which Helene had planted solid roots and come to love. After serving on the Council for six years, she was elected to take the Council mantle as Mayor in 2009 ― and again in 2013 for a second term.

Following the recession, Helene, like all others in her position throughout the U.S., had to grapple with a budget that was only so big. “As Mayor, I had to decide how much to allocate and how best to work as an employer of city employees to address the budget gap while ensuring the provision of essential services to residents. It was a challenge,” she recalls. “My focus was to work with politically diverse Councilmembers to get things done rather than focus on areas of disagreement. I had to set the tone and find common ground ― to connect the dots the way the IB does ― so that we could move forward. My philosophy is very much grounded in this IB way of thinking.”

Helene continues, “Looking back, the IB prepared me for success in a number of ways. The Theory of Knowledge class helped me a great deal to become a critical thinker. The IB curriculum enables you to make connections across disciplines that you would normally think of as distinct. Today, what motivates me the most as Mayor is connecting those dots in a positive way that others don’t see, and I can trace this back to my IB education at Anglo.”

With term limits comes the near-end of Helene’s service as Mayor and the beginning of another ― potentially bigger ― chapter in her public service career. Helene is running for Congress, appropriately for a seat that has been held for some time by another woman, Lois Capps, who has shared Helene’s tireless commitment to championing issues to improve the lives of those living in California’s 24th Congressional district. “It’s the most important place for me to be next,” Helene asserts. “After serving as Mayor, I see how Federal policy and funding can impact local cities. And as a member of the U.S. Conference of Mayors, I have worked in a non-partisan capacity on local and national issues with my counterparts from every corner of the country. As more mayors become involved in Federal policy and elected to Congress, we can hopefully get beyond Washington gridlock together.”

As Helene looks ahead to the 2016 election, we asked for her final thoughts during our look back at her alma mater. She says with pride, “Anglo has had such a lasting impact on me in so many ways.”

It’s been 27 years and Helene hopes to come back and see how the school has changed and grown. When she does come to New York next, Helene plans to stay with Justine Angelis ’87 because old friends are the best of friends.