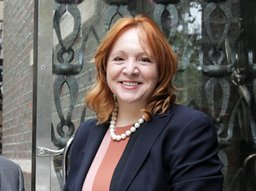 Passionate educator and long-time champion of the International Baccalaureate, Dianne Drew, has been elected to the prestigious position of Chair of the IB Global Heads Council by her fellow Council members. This body of 12 advises the IB Director General, Siva Kumari, about important issues that affect nearly 5,000 IB World Schools in 153 countries.

As Chair, Ms. Drew, who was first elected to join the IB Global Heads Council in 2015, will lead the team, while also taking a seat on the IB Board of Governors, helping Dr. Kumari chart the strategic direction of the IB. This is an especially auspicious time for Ms. Drew to become Chair, as the IB, which has been celebrating its 50th birthday, is looking ahead enthusiastically to the next 50 years and to launching exciting new initiatives that advance international education.

“I am delighted to have been elected Chair of the IB Global Heads Council, a group of some of the finest educators I’ve known, who share my personal, and Dwight’s collective, commitment to the IB curriculum and its focus on educating the whole child. In addition to being academically rigorous, the IB fosters the development of students as open-minded, balanced, and principled human beings, which is more critical now than ever before,” says Ms. Drew. “The IB curriculum, which was created by leading educators of their day, continues to be shaped by the minds and hearts of inspiring educators who know what it means to be in the classroom — who know what it means to encourage students to never stop learning and who do the same for faculty. This makes it very special and gratifying for me.”

Additionally, Ms. Drew is proud to represent Dwight, which has long been an IB leader on the world stage. Dwight was the first school in New York City to offer the Primary Years Program, and the first in the Americas to offer the comprehensive IB continuum for students ages 3-19. As a frontier IB School, Dwight has piloted new programs for the IB, most notably online education, during Ms. Drew’s tenure as Head of School.

Dwight’s own Frontier Teacher Training, launched last year in New York to equip faculty with the same skills and frameworks used by startups, innovators, and entrepreneurs, is the latest initiative with the potential to be implemented in other IB schools worldwide, including Dwight campuses in London, Seoul, Shanghai, Dubai, and online.

While the IB continues to expand and respond to 21st-century challenges, it will remain true to its core purpose of teaching students to think critically, creatively, ethically, and globally — and will hold fast to its cornerstone commitment to building a better world through education. Ms. Drew is honored to be part of this exciting mandate.