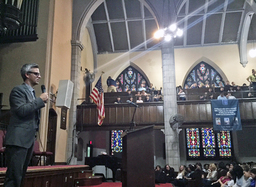 "What's the meaning of the sound "Om," that we often hear in association with yoga?" asked Emily Smith, Middle School Head of Humanities, as she addressed Dwight's Middle and Upper community at the first assembly of the year.

Ms. Smith explained that "Om" is traditionally thought to be the sound of the universe — the culmination of every sound around us forming a communal mantra. She then asked those gathered to pick a single-syllable word — "dog," "tree," "boat," etc. — to say in unison, drawn out over several seconds. The voices of students, faculty, and staff combined to create the desired effect: a Dwight community "Ooommm."

Thus we embraced Dwight's theme for the 2016-17 academic year: Health and Wellness. Students will gather throughout the year to reflect on intellectual, physical, social, occupational, environmental, emotional, and spiritual elements of wellness together in collaborative workshops, group activities, and discussions.

Amidst fun games, videos, and a brief meditative exercise, students were recognized for their outstanding achievements during the third trimester last year. Middle and Upper School students who earned a spot on the Academic Honor Roll were congratulated, as Ron Posner, Head of Middle School, and Eric Dale, Head of Upper School, reflected on their achievements.

Certificates of achievement were awarded to students who successfully passed various development stages for their inventions at last June's Spark Tank event. Spark Tank is a K-12 student incubator for developing new businesses, nonprofits, or ideas to improve our community or School. Students present their ideas and inventions for Q&A, feedback, and funding to The Dwight School Foundation's Spark Tank Committee, which is comprised of industry experts and entrepreneurs from the Dwight community.

Congratulations to one and all!

With another year of exciting achievements and innovations under way, we can't wait to see what's in store!