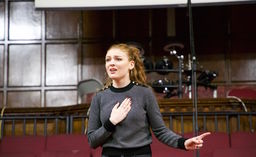 Our talented students performed mesmerizing monologues during Dwight's 34th annual Shakespeare Competition, our school's final round of the 2017 National Shakespeare Competition. This is a particularly special tradition for us, as it was launched by Dr. Paul Beresford-Hill MBE former head of the Anglo-American International School, which joined forces with Dwight in 1993.

Each year, we look forward to seeing the finals unfold at an assembly for students in grades 6-12 — a highlight of the year for the English department and for the audience, who enjoy watching students' acting sparks of genius and passion for Shakespeare take center stage.

The assembly, led by Michael Wiesenfeld, Head of the English Department, featured the top student performers from each grade in the Upper School. They had reached the final round after advancing through two preliminary rounds, distinguishing themselves from more than 200 other student-competitors. Rules prohibited the use of costumes, props, or accents, so students had to rely solely on dramatic movement, expression, and voice to set themselves apart in this test of oratory talent and passion for Shakespeare's work. Their performances were eloquent and earnest, funny, and heartbreaking — and, above all, inspiring!

The judging team had some tough decisions to make. The finalists are listed below, with the winner of each grade level indicated with an asterisk (*):

Of our four grade-level winners, Beatrice Carra '18, was named Dwight's Shakespeare Champion, for her moving portrayal of Desdemona in Othello. We think you'll agree that Beatrice's heartfelt performance speaks for itself!

Beatrice will represent Dwight in the City-wide competition of the National Shakespeare Competition in early March, with a chance to advance to the state and national levels. We extend congratulations to one and all ― and wish Beatrice the best of luck!

Thank you to our student photographers, Romy Ronen '18 and Arthur Zani '19, for capturing these moments of Shakespearean drama!