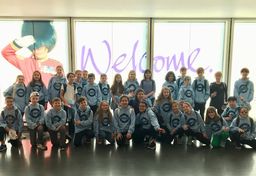 It's hard to believe that our fifth graders have been traveling to Dwight School London for two decades! Continuing a proud Dwight tradition, this year's class boarded a plane in early May to embark on their first journey abroad as Dwight global citizens.

The history of Dwight in London dates back longer than 20 years; our school was founded in 1972, and with this border-crossing development, Dwight became the first independent school in the U.S. to establish a permanent campus overseas. It was quite forward-thinking in a time when the word "globalization" was not yet part of our everyday parlance.

Not surprisingly, it was Chancellor Spahn who envisioned a school — and a world — without borders. He had pursued post-graduate studies at Oxford and learned first-hand how invaluable it is to have overseas learning experiences. As Dwight's global network continued to grow, so did the number of opportunities for students, first in China, followed by South Korea, and most recently, the United Arab Emirates. With Dwight's campus in the cloud, Dwight Global Online School, there truly is no limit or boundary to learning anywhere in the world.

Prior to their annual trip, fifth graders are matched with buddies in year six at Dwight School London, establishing connections that will last through their years at Dwight and beyond.

After touching down at Heathrow, buddies meet for a family picnic, beginning the first leg of what is now a reciprocal exchange program; shortly after returning home, New York students welcome their London cohorts for the second leg.

So much has changed since Chancellor Spahn first opened the door for New York students to walk in the shoes of their London peers, but the core of the program remains the same: a week-long experience designed to introduce students to a different culture, expand their worldview, and develop international friendships.

"I don't know of another independent school that has established such a long-standing tradition of travel for Lower School students, let alone one to a sister school," says Fiona Imboden, Director of Extra-curricular Programs. "Dwight is truly unique in providing these exceptional opportunities to students beginning in fifth grade. I have accompanied them on this journey for five years, and it is always a pleasure to see how families embrace the program and how are young students grow into global citizens."

This spring was an especially exciting time to be in London, as the entire city was buzzing in preparation for the wedding of Prince Harry and Meghan Markle! While fifth graders toured London's fair city, from the Houses of Parliament, the Tower of London, and Big Ben, to the London Dungeon, Covent Garden, the London Eye, and Buckingham Palace, the Royal Family was nowhere in sight. Talk of dress fittings and fascinators overshadowed news of Brexit and budget cuts in the local papers.

When not soaking up the history and taking in the grandeur of the city atop double-decker buses, students spent time on Dwight's campus in North London, attending classes with their buddies; participating in creative drama, music, and visual arts workshops; and playing golf in P.E. They also took in a West End show together, completing the quintessential London experience.

When the time came to say good-bye, students knew it wasn't for long. Just two weeks later, they switched roles and greeted their buddies here in New York for a mirror experience.

Taking a Bite Out of The Big Apple

Upon their arrival, six-year London students dove into their visit to New York with a buddy family picnic in Central Park. They then took in their first view of Manhattan from the 100th floor of One World Observatory, followed by a whirlwind of visits and tours, including the United Nations, Times Square, Chinatown, South Street Seaport, the Museum of Natural History, the National September 11 Memorial and Museum, the High Line, and a speedboat ride on "the Beast" to see the Statue of Liberty.

During their visit to our classrooms during the week, London students saw what school life was like for their buddies, completing the circle. Before heading back home, buddies knew they would stay in touch, have more opportunities to come together in future Dwight exchanges, and that the distance "across the pond" isn't that far, after all.