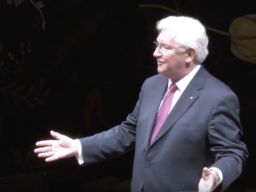 As we get ready to welcome back graduates of Dwight, Franklin, and Anglo-American School for our 2015 Alumni Reunion this weekend, we take a moment to congratulate our long-time friend and former head of Anglo-American, Dr. Paul Beresford-Hill MBE, who was recently elected Chairman of The English-Speaking Union of the United States (ESU).

Countless alumni of both Franklin and Anglo-American remember Dr. Beresford-Hill as the guiding force behind the adoption of the International Baccalaureate curriculum in 1980 – and for his gentle guiding hand in their education.

In 1976, the young educator from the UK with a global vision assumed the Franklin mantle from Dr. M.C. Spahn and worked for four years to prepare for the school's IB future. In 1980, Franklin was renamed Anglo-American International to reflect this new direction. After a decade of leadership, and with the IB firmly in place, Dr. Beresford-Hill moved on in 1991 to meet new challenges and was appointed MBE (Most Excellent Order of the British Empire), in recognition of his contribution to British American education that same year.

Anglo-American and Dwight joined forces in 1993, as detailed in our school's illustrious 143-year history, and the Dwight we know today owes much to Dr. Beresford-Hill.

"We salute Dr. Beresford-Hill for his lifetime devotion to global education and for being elected to the prestigious position of ESU Chairman," says Chancellor Stephen Spahn. "We also commend him for his far-sighted decision to bring the IB to our school long before others. We continued that pioneering tradition and are proud that Dwight is the first school in the Americas to offer all IB programs for children ages 3-19."

The non-profit ESU celebrates English as a shared language to foster global understanding and good will by providing educational and cultural opportunities for students, educators, and members. The organization elected Dr. Beresford-Hill as Chair in recognition of his extensive global experience as a scholar, educator, administrator, and author. Earlier this year, he received the ESU Founder's Award for launching the National Shakespeare Competition, which ties back to his role as Anglo-American headmaster.

Dr. Beresford-Hill conceived a student Shakespeare competition as part of the "Britain Salutes New York" arts festival in 1983. It was a success and he asked the ESU to ensure its continuation by hosting an annual competition. The rest is history: Since then, this program has engaged nearly 300,000 young people nationwide, including many of our own Dwight students.