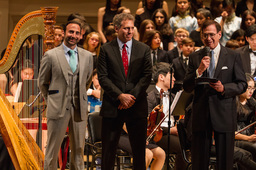 Our Carnegie Hall Concert Celebrating Chancellor Spahn's 50th Anniversary Was out of This World!
Feb 26 2018 3:51 PM

It Was Sold out, Far out — and No One Was Left Out!

The first strum of electric guitars from Dwight's Bentley House Band sent a glorious and thunderous sound from the Carnegie Hall stage to fill the majestic, 2,804-seat Stern Auditorium all the way to the top of the fifth-level tier! It was the exciting beginning of our annual global concert, which this year stood apart from all others that came before.

This was Dwight's debut appearance on the most iconic stage in the world, where performances have shaped the course of music history since 1891 — the year Stern was christened under the baton of maestro Tchaikovsky. Dwight students first began their Carnegie Hall journey in 2000 in the 268-seat Weill Recital Hall. In 2012, we expanded into the 599-seat Zankel Hall before landing on Stern's Perelman Stage this year, where the acoustics are sublime and the view is simply: WOW!

Our sold-out concert was also very special because it gathered 240 Dwight students from around the world with faculty, staff, parents, alumni, and the heads of our global campuses to honor the man — Chancellor Stephen Spahn — whose exceptional career had made this moment, and countless others like it, possible. He has led our school and community for a record-breaking 50 years and we are so fortunate to have this unprecedented continuity of leadership — no other school can say the same.

This concert, which showcased so much student talent and artistry, was the ideal venue in which to celebrate the Chancellor, who encourages all students to reach for the stars. Entitled "A Sky Full of Music," the event brought all of our campuses in New York, London, Seoul, Shanghai, and in the cloud together under one roof — under the Milky Way! All of the music connected to the celestial theme and the experience was augmented by a projection system that told a cinematic story about space. NASA has nothing on Dwight!

Students from grades 4-12 collaborated in a range of ensembles across musical genres to share their sparks of genius. Performances included traditional music and dance by students from Seoul and Shanghai, along with ballet by Dwight Global students, who choreographed their own piece. Additionally, 85 members of our adult community choir took to the stage for their special Carnegie Hall moment.

Later in the evening, the music paused for a tribute to Chancellor Spahn. His sons, Kirk '95 and Blake '89, each spoke from the heart about their father's visionary leadership, tireless work ethic, and unique capacity to inspire and leave a lasting impact on the lives of generations of students.

When the Chancellor spoke, he shared, "Fifty years ago, I believed passionately in a new enlightened educational philosophy — to ignite and utilize a student's interests and talents to create a unique personalized road map to a meaningful future. It remains my calling and mission to this day. My legacy is the students who are the heroes of their own journey. My story is the collection of all their stories."

He continued, "This evening is a sampling of the spark of genius credo that has united the heads, hearts, and hands of performers and supporters as they reach for the stars. Dwight's standard of excellence as the leading International Baccalaureate global school now reverberates across the world."

Following words of thanks to his wife of 50 years, Connie, children, and grandchildren, the Chancellor concluded with, "It is to all of you tonight that I also extend my heartfelt appreciation for your trust in a unique family tradition — a school where everyone is a member of my extended family. I am convinced that together we will motivate and inspire new generations to grasp life with both hands and build a better world."

Grasping their instruments once again, students finished the musical journey that took us around the world in 180 minutes. They ended with a rousing encore by the entire company conducted by alum Andrew Abrahamsen '14, who was last seen at Carnegie Hall four years ago when he debuted his original piano composition. Now a senior majoring in music at Carnegie Mellon, Andrew lent his spark of genius, which was nurtured here on campus, to lead our current performers, bringing his Dwight story full circle.

"Watching incredible musical moments unfold with both students and adults epitomizes the wonder of live performance and caps the musical, social, and cultural journey they each take," says Alistair Hamilton, Head of Performing Arts. "We are honored to have provided our global community with the chance to take to the Stern Auditorium stage where so many famous musicians and conductors before have made history."

It Takes a Global Village

This extensive cross-campus collaboration, which looked seamless on the big night, takes months and months of preparation. It begins with an idea, a concept sparked by Mr. Hamilton, who has spearheaded our global concerts for six years. He collaborates with the team of music directors across Dwight Schools to develop the program and highlight the unique talents and cultural traditions of each campus.

Students audition locally and their tapes are shared among the faculty team. As soloists, duettists, and ensembles are selected, they begin several months of rehearsal before coming together in New York the week prior to the concert date. Over an intense five-day period, they all work together, blending and fine-tuning their individual pieces into one glorious tapestry.

During this immersive experience, students embrace different cultural traditions, connect through the universal language of music, and forge friendships that will last a lifetime.

So, too, will the memory of our magnificent 2018 Carnegie Hall concert last a lifetime!

To read Chancellor Spahn's perspective on the evening, which he shared with Education Update, click here.

For some behind-the-scenes looks at the making of "A Sky Full of Music," click here. And check out these WNYW TV and WABC TV clips that captured the spirit of our global collaboration for all of New York City to see!