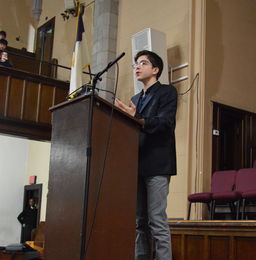 It's been nearly 35 years since she retired from Dwight, but Doris Post remains a well-known and respected figure across campus, thanks to the annual oratory competition that bears her name.

In 1953, Ms. Post joined Dwight as registrar. As the years went on, she assumed increasing responsibilities, first as a music teacher, followed by English teacher, Academic Dean, and ultimately, Chair of the English Department. For nearly three decades, Doris Post influenced the lives of countless students. After retiring in 1981, her legacy continued through the competition that began shortly thereafter.

Each year, the Doris Post Oratory Competition, under the aegis of our English Department, inspires students in grades 6-10 to demonstrate outstanding research, writing, and public speaking skills—critical for success not only in the International Baccalaureate curriculum, but also in life. After advancing through two preliminary rounds and distinguishing themselves from more than 200 competitors, the top two students from each grade move on to the final round in an assembly for middle and high school students.

Before finalists took to the stage to deliver their speeches, Michael Wiesenfeld, Chair of the English Department, welcomed those gathered with a compelling and most-timely "speech" of his own about the power of public speaking. He reported that 96-97% of Americans make the all-important decision about who to vote for during the Presidential election not based on reading about the candidates' track records and platforms, but by seeing them speak — in debates, interviews, and on the campaign trail. Public speaking, Mr. Wiesenfeld concluded, has "the power to change the course of our history, our nation, and our lives."

A panel of Dwight guest judges were charged with assessing the speeches — no easy task, considering the exceptional quality of delivery by all—and named Regina, Fuschia, Jake, Maxine, and Margaret this year's winners. Congratulations to them and to everyone who participated! Doris Post would certainly be proud!